An Adamawa man sells six of his neighbors’ children in the guise of enrolling them in a missionary school.

Yohanna Saidolo, an Adamawa State native, is accused of selling his neighbors’ six children after removing them from their homes and enrolling them in a missionary school in the state.

According to SaharaReporters, Saidolo tricked and kidnapped his neighbors’ children in Koma village, Jada Local Government Area, claiming he had gotten admission for them to a missionary school in Yola, the State capital.

He allegedly handed the children to Madam Lydia of the Rhumde-Baru neighborhood in Yola’s Jambutu satellite town. 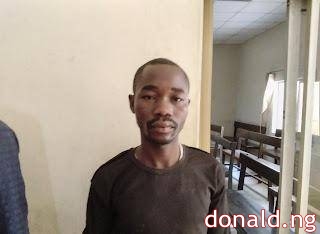 Markus Anthony, one of the parents, stated that Saidolo abducted their six children, promising to enroll them in a missionary school in Yola, but they have not seen any of them since.

“We couldn’t reach our children, and they couldn’t come home for any holiday, not even Christmas,” Anthony lamented.

Suspicious of foul play, Anthony and five other parents reported the incident to the authorities, according to Ibrahim Aliyu, a police prosecutor.

Upon his detention, Saidolo admitted to selling the children to Madam Lydia but refused to reveal the agreed-upon amount to SaharaReporters.

“I actually delivered eight children to Madam Lydia, including two of my own,” Saidolo explained.

Saidolo was accused in a Chief Magistrate Court on Wednesday with the offence, which violates sections 257 and 259 of the State’s penal code law of 2018.

After pleading guilty to the offense, the judge, Alheri Ishaku, ordered his confinement at a correctional center facility. As a result, he granted the prosecution’s request to send the case file to the Department of Public Prosecution for further advice.

While of today, the children’s locations are unclear, as the police investigation continues.

Meanwhile, the case has been postponed until March 25, 2022.